London, Kings/Queens and a close to Derby Bollard... 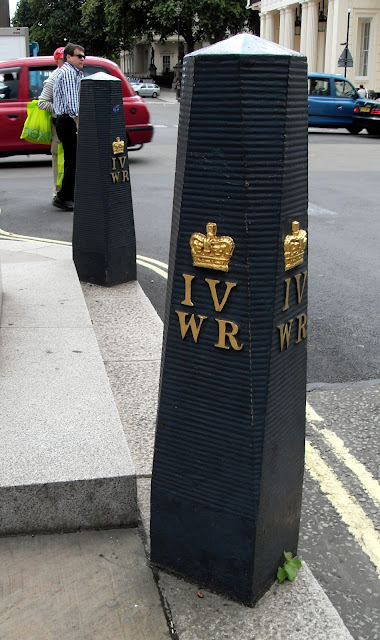 The bollards in the picture have always interested me for they sit neatly at corners to a beautiful monument to the Crimean War at Waterloo Place SW1. 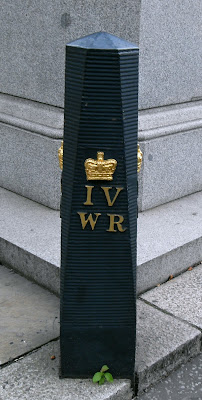 Now the Crimean War took place under the reign of Queen Victoria (1837-1901) but the bollards placed at the corners of this memorial refer to King William the 4th (1830-1837). This doesn't really 'fit' but the 'Sailor King' obviously has close links to the area after all he was a reigning monarch and Buckingham Palace, Clarence House happen to be a short walk away. A special thank you to @LondonHistorian @Bebejax and @clareangela #thankyou...

You may have noticed that these bollards are identical to the bollard in the previous post except for the Crown and lettering which happen to be placed upon three of the sides of the body. These bollards are also in rather top condition and have certainly been maintained to a higher standard.

Now continuing our guest bollard theme for the months of December and January can I welcome this beautiful contribution from the @missprofanity on the @twitter. Yes 'miss p' has been a loyal follower of the bollards on twitter and is certainly never one to back off from giving you an honest open forthright opinion on many a subject matter.

The bollard chosen by 'miss p' is certainly a near one off and I've only ever come across one of a similar colour (burgundy) in London. The bollard has a square base which quickly tapers inwards and then forms a circular column that rises vertically until we reach the top/head where we find a circular ridge/rim and a slightly domed near flower rounded top. Like the bollards above this one below is emblazoned with a dandy pattern and what appears to be a rose in the middle, a rose of England ? 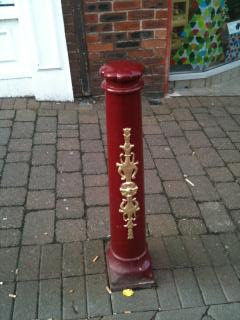 Bollards of London...
Posted by www.bollardsoflondon.uk at 11:43:00