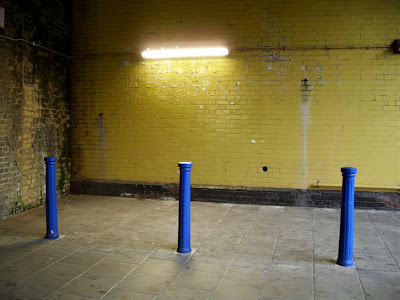 Vauxhall is a part of London better known for its links with the Secret Intelligence Service MI6, Serious Organised Crime Agency (SOCA) soon to be renamed National Crime Agency (NCA) and its busy gay night life that has effectively trumped Soho. Who would have thought that this part of South London could deliver on the bollards front.

Here at Glasshouse Walk I came across three royal blue coloured bollards of a rather typical cylindrical design. With flat tops and a slightly tapering ridged body these bollards don't flatter, but when placed in the context of a backdrop of a canary yellow wall complete with a horizontal fluorescent light this setting takes on a rather different look.

We are in fact under the railway lines leading into London Waterloo, you can see the water damage to the brickwork on the left hand side of the picture.

Bollards of London...
Posted by www.bollardsoflondon.uk at 13:25:00