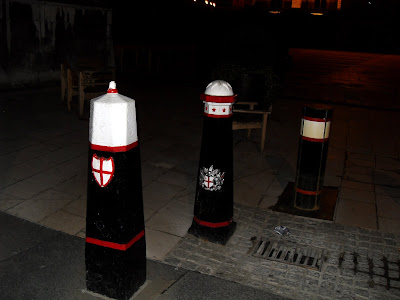 At the top King Street in the City of London we come to Guildhall Court Yard and right at its entrance we find a row of rising bollards with some of the usual bollards we normally see in the City (Square mile) everyday.

In the picture above we have managed to capture a rising bollard on the right hand side (still in the City/Corporation of London colours of black, white and red) with a more traditional looking bollard in the middle but on the left hand side we have found an absolute gem, a real one off that I have never seen before in the Square Mile.

The bollard on the left of the picture is most usual and unique at the same time for it has a rather large square base with a vertical body up until the red band where the body then tapers and forms an octagonal shaped top that rises slightly to be finished off with a nipple. The body of the bollard is painted predominately black with two red stripes. A badge on the front of the bollard is shield like and forms a George Cross, the upper part of the bollard is white in colour with only a red band on the nipple at the very top.

Bollards of London...
Posted by www.bollardsoflondon.uk at 02:17:00