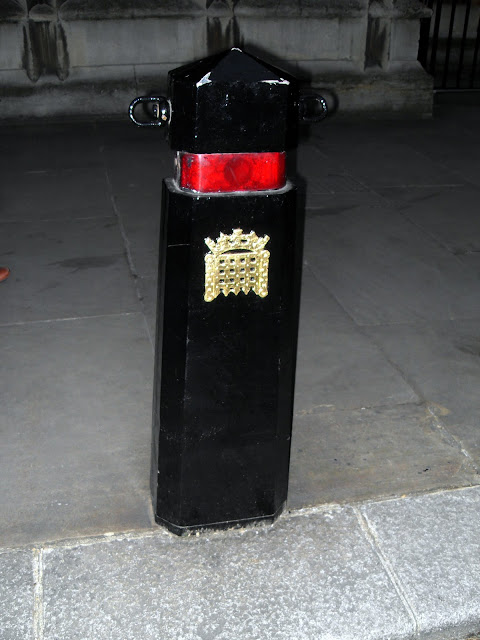 Order, Order, Order a gem of a bollard delivered to you by chance. I bumped into Sally Bercow the other week and sad hello and following a brief but rather interesting conversation offered the lady a lift to Parliament.

Sally Bercow is tall, attractive, intelligent and wife of the Speaker of the House of Commons. Who would have thought that a short journey in a London taxi-cab would allow me to capture one of the hidden gems of a bollard on the parliamentary estate.

Here above is an octagonal shaped bollard painted in the main gloss black. The bollard is in fact a foot smaller than your average but in exceptional condition. The upper part of the bollard reduces in size inwards and then an almost head like part appears which then creates a peak/point.

The neck of the bollard is painted a beautiful red which really sets the bollard off. The head/upper part of the bollard has two eyelets on either short side that would allow a rope or a chain to be attached. However it is the badge/crest or emblem of parliament that makes this bollard very special indeed. The Crowned Portcullis the emblem of the mother of all Parliaments painted in gold upon the wider side of the bollard that creates the colour contrast between the black/red colour of the body.

Bollards of London...
Posted by www.bollardsoflondon.uk at 06:42:00

Email ThisBlogThis!Share to TwitterShare to FacebookShare to Pinterest
Labels: www.thecornershot.blogspot.com