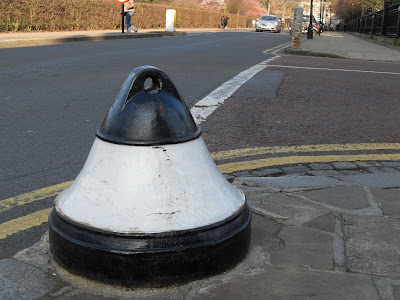 Recently a comment was left on this blog site by a lady named Jennifer on the 13th post "Zebra bollard with a bell attached". Now the comment was rather or should I say very interesting because she stated that whilst on a walking tour in London the guide referred to these bell shaped bollards and informed her that they were used to tie "barrage balloons" too.

With the power of the web and I have to say google I put the words barrage balloon in and hey presto found that here in the UK the RAF did have a squadron(s) which came under the name "Balloon Command". Please click on the link http://www.bbc.co.uk/ww2peopleswar/stories/46/a1072946.shtml and read a little about the work of the people who helped defend our cities from the bombers in the skies. Some of these barrage balloons were winched in and out of position but surely some of them were more permanent and therefore the hole in the top of these bell shaped bollards makes perfect sense.

The bollard or "bell" in the picture is "zebra stripped" or black and white and now we have an idea that they may have originally been used to attach "barrage balloons" to it makes sense they were painted "black and white" due to the blackout late at night.

We shall research further and confirm this rather interesting of tales/stories but at the moment "Jennifer" and her comment makes perfect sense.

PS Thank you to all the brave men and women of our armed services whether they be on the land, in the air or at sea...god bless you all.
Posted by www.bollardsoflondon.uk at 17:03:00

Email ThisBlogThis!Share to TwitterShare to FacebookShare to Pinterest
Labels: www.thecornershot.blogspot.com