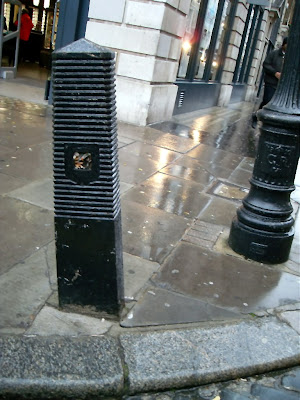 Just at the end of King Street in Covent Garden I came a across a bog standard Westminster bollard which we have looked at on a couple of occasions before.

What struck my eye though was the fact that the area where a crest is normally glued had fallen off and it appears smokers, yes smokers have begun to use the bollard as an ashtray and place the cigarette butts in the hollow left by the missing crest. People do litter but in an odd way this demonstrates that the smokers didn't want to throw the butts on the pavement but actually place them in a bin of some sort.

Who would have thought a humble bollard could tell a tale about human behaviour but then again ask yourself why the bollard is there in the first place.

Email ThisBlogThis!Share to TwitterShare to FacebookShare to Pinterest
Labels: www.bolotics.blogspot.com