Zebra Bollard with a Bell Attached ? 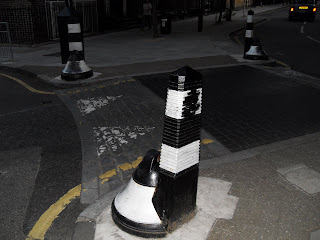 Now we have seen the Zebra style of bollard before in Cubbit Street N1 but it seems here in Camden they can trump the Zebra by attaching what appears to look like a rather large bell ?

But if we look closer at picture you'll notice that once again the road has been raised so it is level with the pavement and logic would dictate that many a truck as taken a few of these bollards out so the council more than likely thought "how do we protect the bollard from damage" and somebody decided to place a zebra coloured half part wrap around bell end to protect the bollard from damage.

We must have money to burn here in the UK if we can spend vast sums on street furniture like this because this junction starts to defy logic and common sense...
Posted by www.bollardsoflondon.uk at 12:50:00