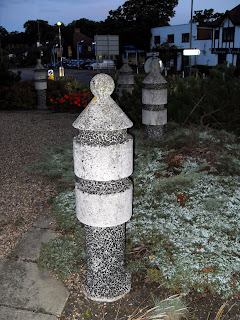 Is this a bollard with a Chinese influence for I found these the other week whilst travelling through the London Borough of Bromley. They were planted around the perimeter of the roundabout know as the Chinese garage.
Let us a take a close look at the design they seem to be your average size made of concrete with a pebble dash effect surface but it is the top two thirds that give you this odd oriental look. The cone shaped top with concrete ball just looks a little Chinese to me.
Who would have thought we would have found such a odd looking bollard in the leafy green suburb of Bromley.
Posted by www.bollardsoflondon.uk at 11:42:00

Email ThisBlogThis!Share to TwitterShare to FacebookShare to Pinterest
Labels: Chinese roundabout in the London Borough of Bromley.